I was in church the Sunday evening of the Great San Antonio Blackout. More specifically, I was in The Church of Castle Hills at Loop 410 and Roletto Drive which later became Cornerstone Church and moved out to 1604 and Stone Oak when all the lights went out. Pastor Hagee yelled at me up in what he called Ravens Roost “ Turn the lights back on!” I yelled back down, “It’s not me…The power to the building has gone out.” He said “OK” and dismissed everyone to go home.

I collected my wife and two boys and headed toward the car. There on the radio I heard Michael Black explaining that KONO had just returned to the air after getting the generator running at the studio. All of San Antonio was in the dark without electricity.

At the time, I worked at KONO. I also had a two-way radio in my car so I could do traffic “cut ins” during the Don Couser Morning show. I powered up the two-way and called into the studio. I let Michael know that I was in my car and ready to do reports…If he wanted them. He said “Great!” He also informed me that Bill Dante was in the KONO mobile news unit Big Red and station owner Jack Roth was in his car with a two-way radio also.  Bill and I spoke via the “two-way” and decided that he would cover one side of town, while I would head to the other side of town for coverage there. Jack Roth was in route to City Public Service (the local electric utility) Headquarters to find out what was going on!

Since KONO and KKYX were the only two stations with both the transmitter and studio covered by backup power generators, we were pretty much the only coverage of the blackout in San Antonio. 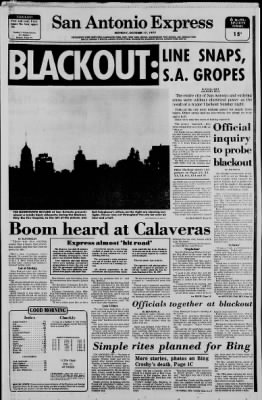 I thought it rather amusing that the next morning there was remark in an article in the newspaper about those “young guys at KONO running all over the city reporting on all the unimportant stuff that was going on during the blackout!”