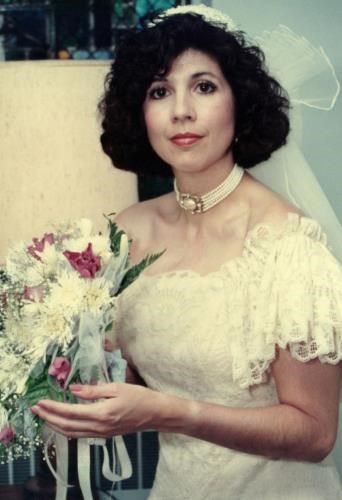 Every once in a while God takes an angel, wraps a human body around it, then temporarily places them on the earth to be a blessing and a positive influence to other earthlings. Rosenda was such a person, an angel in disguise. At San Antonio College (SAC) Rosenda, who was mostly shy and would always listen much more than she would talk, definitely knew what she wanted as a career. She was at SAC, during the last few years of the 70s, to learn how to express herself. She attended Radio-Television-Film (RTF) classes in the middle of a group of students which included Chrissie Murnin, Mark Carrillo, Linda Guzman, Bruce Baker, Lief Calburg, Sue Calburg, Phil Vidol and others to name a few from those years who went on to broadcast careers.


It is a very true fit for a scholarship in Rosinda's name to be made available to serious San Antonio College students. Here is why.


Rosenda's initiation to the news business was at SAC by Instructor Jeff Hinger, who was a serious teacher who brought students to an awareness of their true intentions. To put it very bluntly, he separated the wheat from the chaff. For a final grade in one of his classes, students had to pair up and develop a 28-minute program about SAC to air on the college radio station (KSYM). Rosenda and a classmate chose the SAC Cafeteria as the focus of their report. To get an A+ for the class meant long hours with a lot of work at a level unknown to most students but well known to broadcast news professionals. Rosenda had to get over her shyness in order to make phone calls to set up interviews with SAC Administration and also with those who had the contracts to provide food and vending services at SAC. It also meant approaching SAC students who ate at the SAC Cafeteria asking them to grade the food and services. Then all the collected material had to be broken down and a script had to be written and edited in order to make sense of everything, including captured sound bites. Editing the audio had to be by razor blade since all the audio had been captured on reel-to-reel audio tape. Addtionally the program HAD to be 28-minutes...No more...No less.


The 28-minute program was true baptism by fire! Many of you reading this know that's a short version of what it really took to make the 28-minute program happen. Not only did Rosenda did get A+ for her work, but she got so much more from putting together the KSYM Radio Program than she at first realized.


Through that experience Rosenda grew and got her roots firmly planted. She was now ready to grow further. She had, in fact, found the way to express her career goals. From SAC Rosenda went to her first job in radio, a professional news writer for the morning show on WOAI radio. She knew she was an apprentice and she quickly honed the skills of the craft she learned at SAC, especially if her news writing was going to continue be read on the air by well known radio newsman Bob Guthrie.


Not much has been written about Rosenda's college days. Others have already written a lot about Rosenda's rise in the broadcast business and stations where she was employed. Each of those places represent the continual honing of her skills until finally while in television, Rosenda became recognized as a Master of her Craft. She was not just another pretty face. It was by hard work that Rosenda earned every step made upward in her career. And she bloomed even greater when Larry Burns came into her life. Despite sufferings earlier in life, which we all experience, Rosenda went back to God just as she came...an angel blessed!


There is much to learn from Rosenda's numerous accomplishments. To a budding student Rosenda Rios Burns inspires quality of character. She inspires dedication. She inspires perseverance. She is the embodiment of everything a young and serious San Antonio College media student needs to imitate in order to be successful. May Rosenda always be remembered not only by those who loved her, not only by her accomplishments, but also by those future students who are inspired to become in their life as Rosenda became in her life.


Written By An Old Friend