When queried as to why he didn't co-write songs Roger Miller responded "Did Picasso co-paint?"


According to Bill Anderson...In early 1961 he and Roger Miller were traveling together from Nashville to San Antonio in Roger's Rambler Station Wagon.


During the long trip Roger mentioned that he was working on a song. When Bill asked him the name of the song he replied "When Worlds Collide." Bill immediately informed Roger that he needed to come up with another title for his song since "When Worlds Collide" was already the name of a movie from the 50s. When Bill asked Roger if he would title one of his songs "Gone With The Wind" he immediately replied "Yes, I would!" Then Bill asked "What if you called the song `When Two Worlds Collide' instead?" Roger thought about it for a while and decided Bill's song title suggestion was a good one.


Bill and Roger ended up working together on "When Two Worlds Collide" during their long trip. After the song was finished, they kept playing and singing it over and over again so they would not forget it.


In 1961 neither cassette tapes nor digital recorders existed so when they arrived in San Antonio, Bill immediately called Neal Merritt (KENS/ KONO/KBOP) who brought a reel-to-reel Wollensak tape recorder to their hotel room and recorded the song for posterity. 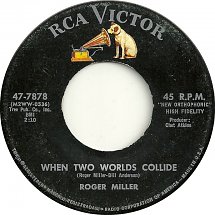 A few months later Roger had a hit record with "When Two Worlds Collide."


"When Two Worlds Collide" became a hit again in 1969 for Jim Reeves and once again in 1980 for Jerry Lee Lewis.

"When Two Worlds Collide" ended up being Roger's most successful song (number of times and height on the record charts). Ironically it was co-written.